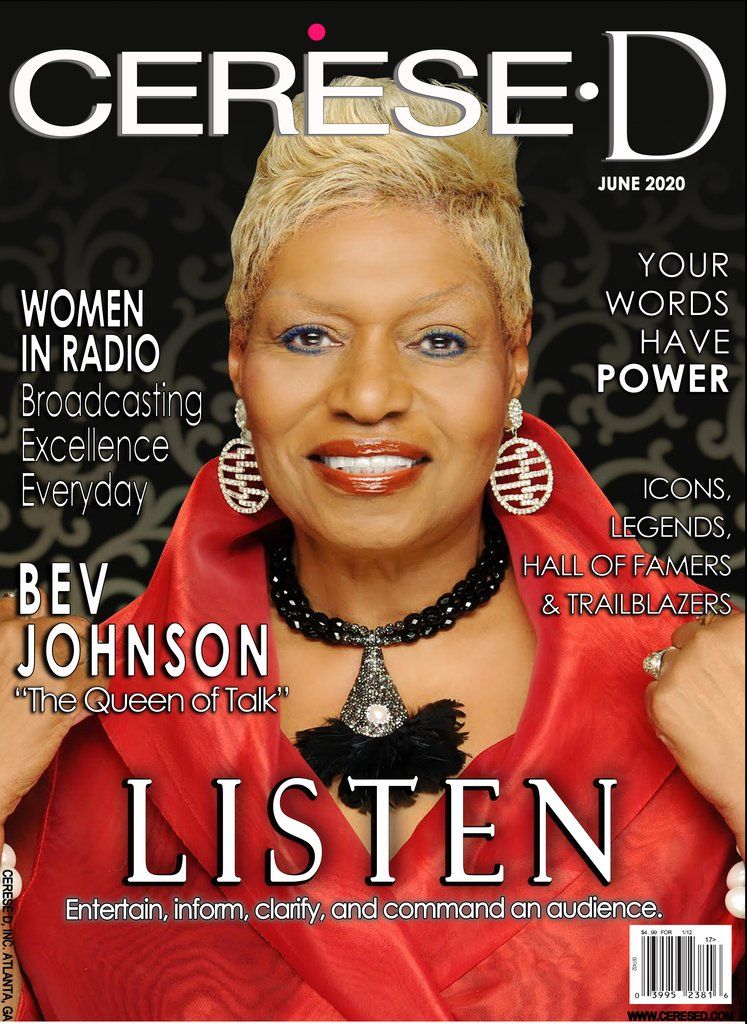 Born Beverly Elaine Johnson to the parents of the late William Van Johnson and Atlas Danner Johnson.  A 1970 graduate of Ann Arbor Pioneer High School in Ann Arbor, Michigan. Bev received her Bachelor of Arts Degree from Rust College in English Literature 1975, and Master of Science Degree in Educational/Media Technology in 1979 from Jackson State University.

Bev’s broadcasting journey began in 1976 at WJSU Radio which eventually lead her to WOKJ, WJMI, and WKXI Radio stations in Jackson, Mississippi working as disc jockey, programming assistant, public affairs director, and news director. In 1981, the journey continued to Memphis, Tennessee  working at WLOK, WMQM, WWEE/WLVS, and now the legendary WDIA Radio, America’s first Black Radio station, where she has been employed for 37 years, and continues to host “The Bev Johnson Show,” in its 33rd year.  Bev has been in radio broadcasting for 44 years and is known affectionately as “The Queen of Talk” around the country.

Always civic minded, Bev received a certification degree in Substance Abuse Counseling from Southwest Tennessee Community College as well as certification in Drug Court Counseling from the Drug Court Institute in Nashville, Tennessee in 2003. Community conscious and engaged, Bev continues to live out her motto, “As You Treat Yourself, You Will Treat Others” by serving and giving back to others. She has served on the boards of The Rock N Soul Museum, Memphis Area Planned Parenthood, and The National Black Programmers Coalition and Memphis City Beautiful.  Bev has been a hands-on mentor for the Gordon Elementary School girl’s program, a chairperson for the NAACP’s Annual Radiothon, a former auctioneer for WKNO Television’s Action Auction and the Memphis Chapter Coalition of 100 Black Women and a devoted volunteer for the Stax Museum, the Museum of American Soul Music. Bev is a member of Delta Sigma Theta Sorority Inc., and a chartered member of the Shelby County (TN) Alumnae Chapter of Delta Sigma Theta Sorority, where she served as 2nd Vice President for two years.

Bev is a shining star in radio broadcasting and is the recipient of numerous awards and accolades including 1989, 1991, 1992 and 1996 News/Public Affairs Director of the Year by the National Black Programmers Coalition, UNCF Outstanding Alumnus Award 1996, National Association of Broadcasters Marconi Award Personality of the Year Nominee 1993, 1994, and 1995.  In 1996, Bev was Billboard’s Personality of the Year.  She has been honored by the Tennessee General Assembly House of Representatives for her tenth and twentieth year hosting “The Bev Johnson Show,” the Memphis City Council, and the U.S. House of Representative for “The Bev Johnson Show” on WDIA Radio. Bev was named the Memphis Music Commission’s 2013 Emissaries of Memphis Music and received the Jus Blues Foundation 2013 Jack “The Rapper” Gibson Radio Pioneer Award. In 2020, Bev received the Trailblazer Award from the Memphis Heritage Trail and the keys to the City of Memphis by Mayor Jim Strickland.

Bev is a faithful member of the Mt. Pisgah C.M.E. Church and Co-collaborator of Heart 2 Heart Counseling Services. As a passionate educator, Bev has shared her love of radio by raising up the next generation of broadcasters. She was a radio instructor at Rust College in Holly Springs, Mississippi for eight years. Presently, Bev is an instructor at Southwest Tennessee Community College where she teaches Speech and Writing. Bev has taught at Southwest for 30 years. A sought-after motivational speaker, Bev’s oral history was chronicled by The History Makers Media Division and is housed in The Library of Congress.