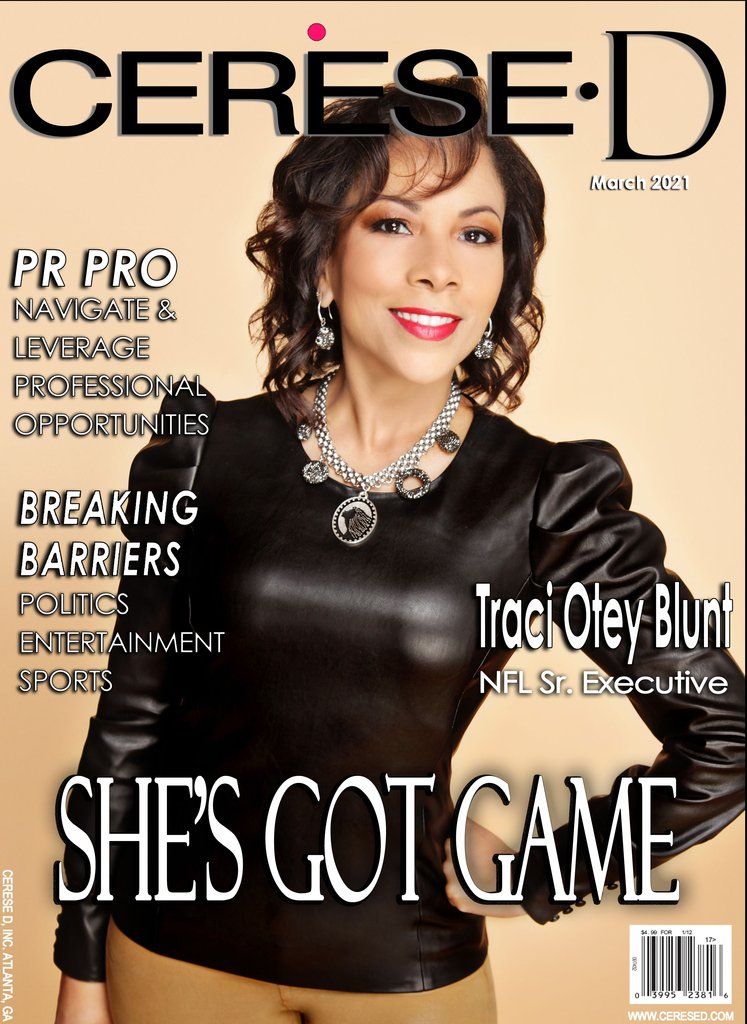 Traci Otey Blunt is Senior Vice President of Corporate Communications at the National Football League (NFL). With over 25 years of professional experience as a political operative, presidential campaign advisor, and strategic and crisis communications director, Traci’s leadership as an executive on behalf of the NFL represents the culmination of her expertise.

Her career began when she was hired by former U.S. Senator Harlan Mathews’ office as a legislative correspondent – a position considered only one step above that of an intern. She was responsible for reviewing, researching, and responding in writing to constituents contacting the office with their questions and concerns. Traci learned as much as she could during her tenure in the Senate. Though others would likely consider this an unremarkable starter position, Traci holds it in high esteem.

“When I was reading the letters and corresponding with constituents in need of help, it solidified my determination to become a change agent and taught me that communications is, truly, a craft,” said Traci. “It changed the trajectory of my professional pursuits and intentions.”

As Communications Manager at the National Association of Attorneys General (NAAG), Traci confirmed her purpose and talents by ensuring that major policy initiatives, like the Violence Against Women Act, were explained and disseminated to a broader audience through NAAG’s first-ever conference focused on this important issue. By doing so, there was an uptick in civic, non-profit, and organizational engagement on the issue, which led to its reauthorization and elevated its national prominence.

Unsurprisingly, Traci’s reputation as a strategic communications operative attracted the attention of prominent political leaders seeking effective leaders with proven track records of excellence and innovative thoughtfulness. In 2000, Traci was tapped as Communications Director for the Gore/Lieberman Presidential Coordinated Campaign in Tennessee.

In 2002, then-D.C. Mayor Anthony Williams‘ office appointed her Director of Communications for the Deputy Mayor of Planning and Economic Development. She led, managed, planned, and coordinated the unveiling of all communications related to the City’s economic development initiatives.

Traci’s segue from government into the private sector arena was seamless. At Ogilvy Public Relations, she served as VP in the public affairs practice and also served as a leader of its multicultural practice where she had oversight of several high-profile accounts and public affairs campaigns, including: the African American Medicare Part D Prescription Drug Campaign for the Centers for Medicare and Medicaid Services (CMS); the U.S. State Department’s Diplomatic Readiness Initiative; and the U.S. Department of Labor’s Office of Disability Employment Policy.

Her political and communications acumen firmly established her among high-level politicians, then-Senator Hillary Clinton’s presidential campaign brought her on board in 2007 as Deputy Communications Director and Director of African American media.

Following the Clinton campaign, she transitioned to The RLJ Companies as SVP for Corporate Communications and Public Affairs and worked directly with its founder Robert L. Johnson, who is also the founder of Black Entertainment Television (BET). Traci was later named the President of Urban Movie Channel, and Executive Vice President of Corporate Affairs at RLJ Entertainment, where she launched the first-ever subscription video on-demand streaming channel focused on Black Film and Television.

In 2018, Traci’s preternatural skills set as a veteran political, entertainment, strategic communications operative converged when she accepted the SVP of Corporate Communications for the National Football League. Today, she directs communications strategies across key areas within the League, including: current affairs; business operations; public affairs; diversity, equity and inclusion; and social responsibility and social justice issues.

Due to her established, cross-discipline, cross-industry expertise, she also leads several communications initiatives central to the NFL’s work focused on social responsibility, including “NFL Votes” and “Inspire Change.” These key initiatives were at the forefront of the 2020 football season and have elevated the ongoing work in communities by NFL players, clubs, fans, and league staff.

“What I have learned is that when communication and interaction are not exchanged, it promotes division instead of understanding,” said Traci. “I am grateful for everyone who taught this lesson to me along the way because now, I have that much more to pass along to other women – and my daughter – how to navigate and leverage opportunities while on their professional journeys.”

Traci is a highly-sought after keynote speaker, moderator, and panelist for national organizations and is recognized as a leading voice, educated in a myriad of subject matters. As such, she has received multiple awards, including: “2020 NFL Executive of the Year” awarded by Off The Field Players’ Wives and POWERHANDZ, Inc; the 2020 “PLAY MAKE HER” award for sports and entertainment; The Network Journal’s Top 25 Most Influential Black Women in Business; PR Weeks’ ‘Champion of PR’; ColorComms 2017 Circle Award; and featured in Mocha Market Magazine – “Women in Charge, On Fire and Changing the World: National Advisor to Presidential Contender and Business Tycoon.”

Traci holds a Bachelor of Science in Criminal Justice from Tennessee State University, which awarded her with the Women of Legend & Merit and the Women of Influence Award from its national alumni. She is a distinguished member of Delta Sigma Theta Sorority, Incorporated, Alpha Chi Chapter. Traci grew up in both Los Angeles, California and Nashville, Tennessee. Today, she resides in South Orange, New Jersey with her family.