Cerese D is excited to introduce you to Gloria Mayfield Banks, our first Celebrity Jewelry Line Collaborator! Gloria Mayfield Banks is a global speaker, coach, author, and confidence building expert whose passion is to take women from Ordinary to Extraordinary. Her ‘Super Bad All Day Long’ brand calls for the ambitious, winning woman to be unapologetically powerful. Cerese D is proud to partner with Gloria to bring the bling to her Super Bad, women propelling culture. We are pleased to announce the collaboration launch of “Gloria Mayfield Banks X Cerese D Jewelry”. Gloria will also make a cameo on January 8, 2023 on the Cerese D Jewelry “One of A Kind” virtual pop up event. Register here. 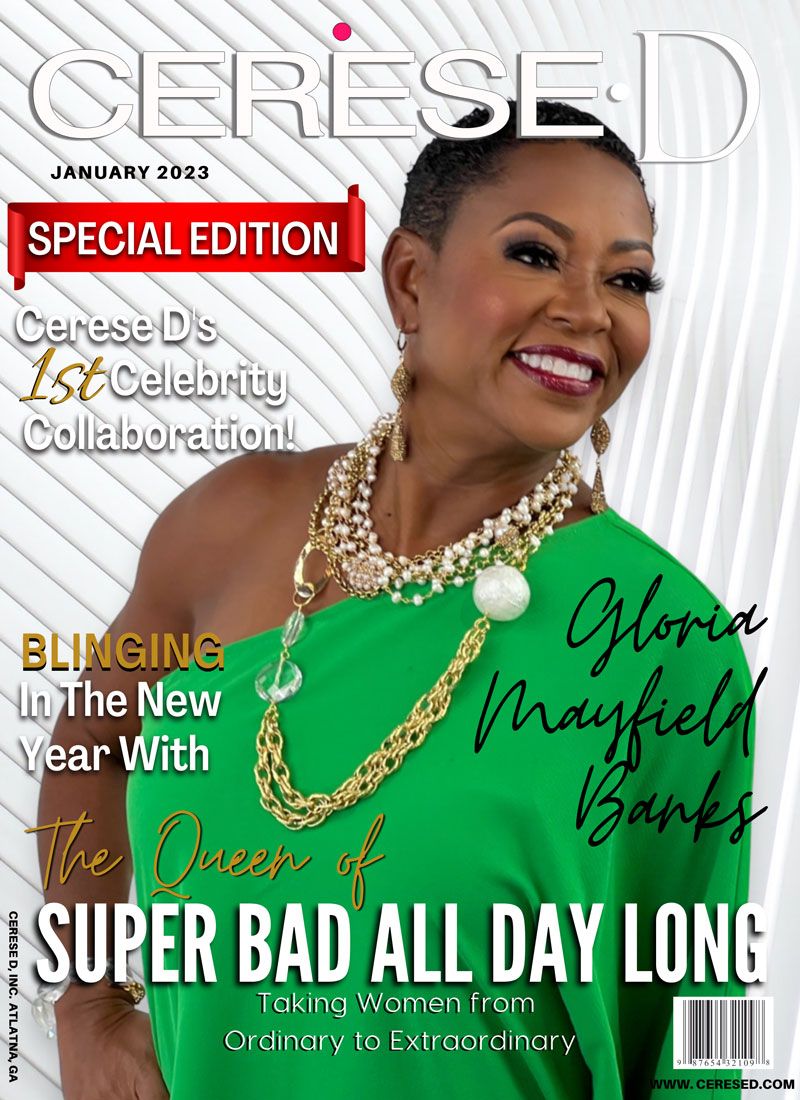 Gloria Mayfield Banks is a global speaker, coach, author, and confidence building expert whose passion is to take women from Ordinary to Extraordinary. Her ‘Super Bad All Day Long’ brand calls for the ambitious, winning woman to be unapologetic in her pursuit to create her Queendom. Gloria’s expertise in leadership, sales, and life skills can be acquired through her events, online coaching programs, and books.

Gloria’s expertise in leadership, sales, and life skills can be acquired through her keynote speeches, events, online coaching programs, and books. 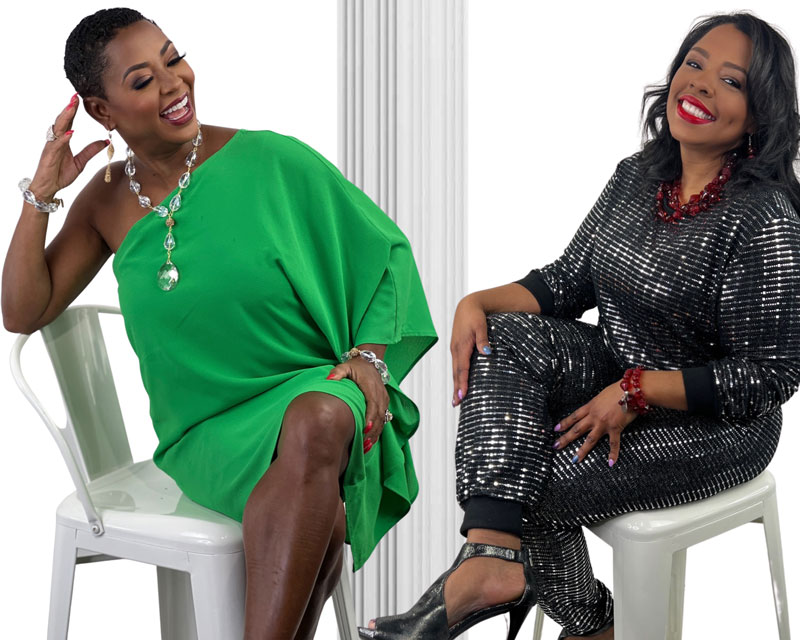 Gloria considers her childhood to be a huge part of the foundation for her success, “My parents were very intentional about our self-esteem. They raised four girls who are all entrepreneurs now. Neither one of my parents were entrepreneurs. It wasn’t in our family at all, but my parents were very wise. They took us all around the United States, made us go to every single museum and were extremely intentional in our Black history. It gave us a great foundation of strength and fortitude. All of us are well-educated, and they were too. We had a lot of extracurricular activities and faith was a big part of our upbringing. We had a solid foundation in our church.”

Gloria’s passion is to inspire others with her story of courage, resilience and faith. Long before rising to the top of the network marketing industry, Gloria was diagnosed with dyslexia in middle school. Her days were spent learning to overcome and beat the odds, and that’s exactly what she did. She often coaches women to operate in their gifts. Operating in her gifts is the very thing that allowed her to push through her circumstances and begin to break barriers.  A graduate of Howard University, Gloria holds an MBA from Harvard Business School and an Honorary Doctorate Degree from the University of Maryland Eastern Shore.

Dr. Banks is well-known for her 33-year career with Mary Kay, Inc. In 2021, she finished as the #1 company earner, expanded her business to 9 countries, and broke many company records. Her success with building and sustaining her #1 team inspired her book, “Quantum Leaps”.

Gloria began her professional career in the computer industry; first as a sales representative for IBM, and later joining Stratus Computers as a manufacturing marketing manager. She went on to become Assistant Director of Admissions at the Harvard University School of Business, where she traveled nationally and internationally to represent the university.

In 1988, as a single mother of 2, faced with a difficult divorce, Gloria began selling Mary Kay products to supplement her income. Gloria says, “When other women look at me, they see a very smart and successful woman. They would never guess that I was in a domestic violence situation for 10 years.” As a Domestic Violence Survivor, Gloria travels the world speaking to other women about the importance of creating financial independence to increase your choices.

Within a year of beginning her Mary Kay business, she set company sales records. She grew her business to over $24 million in retail sales and a sales group of over 6,000 consultants. Her record-breaking rise to Elite Executive National Sales Director, the highest sales position, was faster than anyone in the company’s 50-year history. She held the #1 position in all of Mary Kay for the last 6 years of her career with the company.

She is best described as “Energy in Motion”. Her speaking spans the globe, as she is always on the go, traveling and speaking. Gloria’s enthusiasm is contagious and her message is strong. “Success is a choice that once committed to can be achieved!” A dynamic storyteller, Gloria presents her ideas and thoughts in a conversational style and uses creative humor to impact her audience. She has demonstrated by her own example, that through determination and hard work, any goal can be achieved.

Gloria has shared her secrets to success with national media audiences appearing on CNN with Soledad O’Brien, ABC-TV, and CNBC with Donny Deutsch on The Big Idea. She has also appeared in Fortune, Connect,  Black Enterprise, Glamour, Working Woman, PINK, L.A. Style,  and  Ebony Magazines.

Most recently, Gloria has enjoyed sharing the stage with Oprah, Iyanla Vanzant, Lisa Nichols, and other powerhouse entertainers and industry leaders. There is a Harvard Business School case study included in graduate level textbooks and taught to many business students nationwide named, Gloria Hilliard Mayfield at Mary Kay Cosmetics.

Gloria’s Create Your Queendom program teaches women confidence-building techniques and strategies for how to create a plan to increase income and manage relationships while identifying and achieving their life goals. “There is so much that can shift if you become intentional about being confident and louder about what you are creating,” she explained. Gloria developed a program for leaders of leaders called Quantum Growth. It shows the already successful business woman how to move into 6 and 7 figure growth.

Gloria is married to Ken Banks who is also a business owner and self-made millionaire. He is the founder of Banks Contracting Company and Banks Development Group. Gloria and Ken share four adult children, five grandchildren, and reside in Maryland. Their new podcast Banking On The Banks premieres early 2023.

To learn more about how to work with Gloria: www.gloriamayfieldbanks.com/next 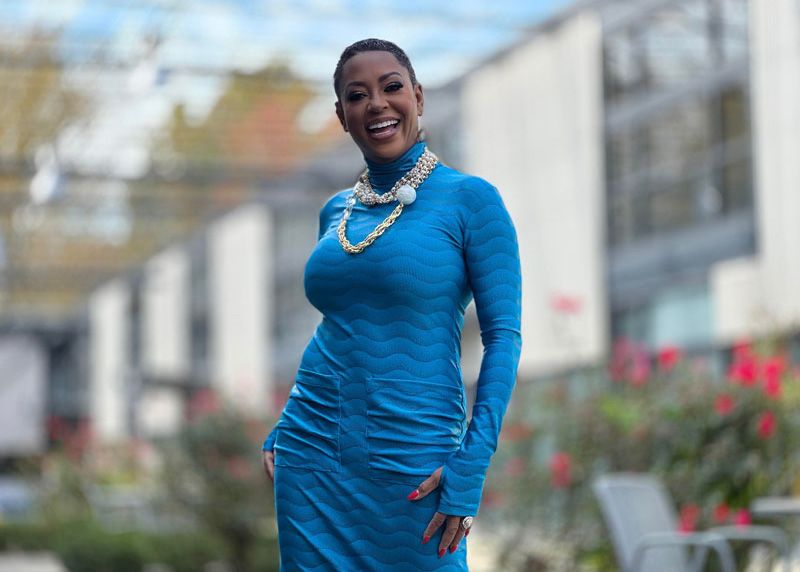 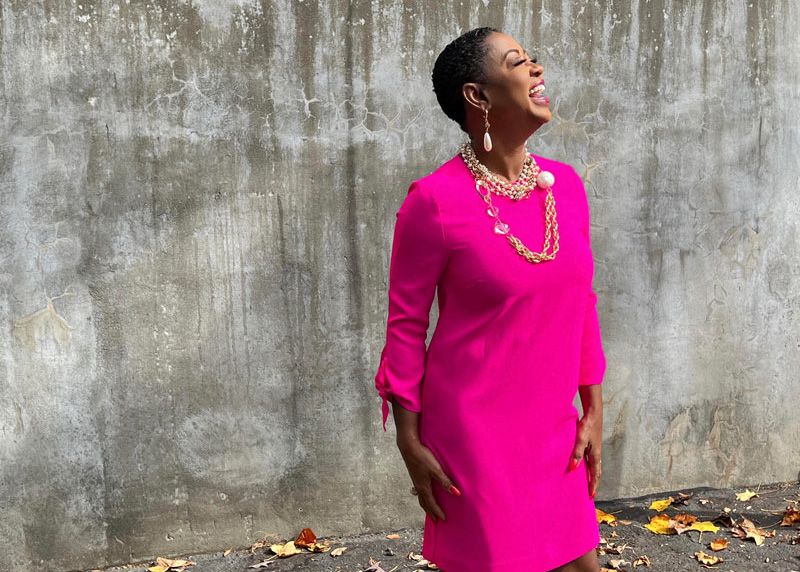