If you want to get organized, training from an ex-military Sergeant is as good as it gets. 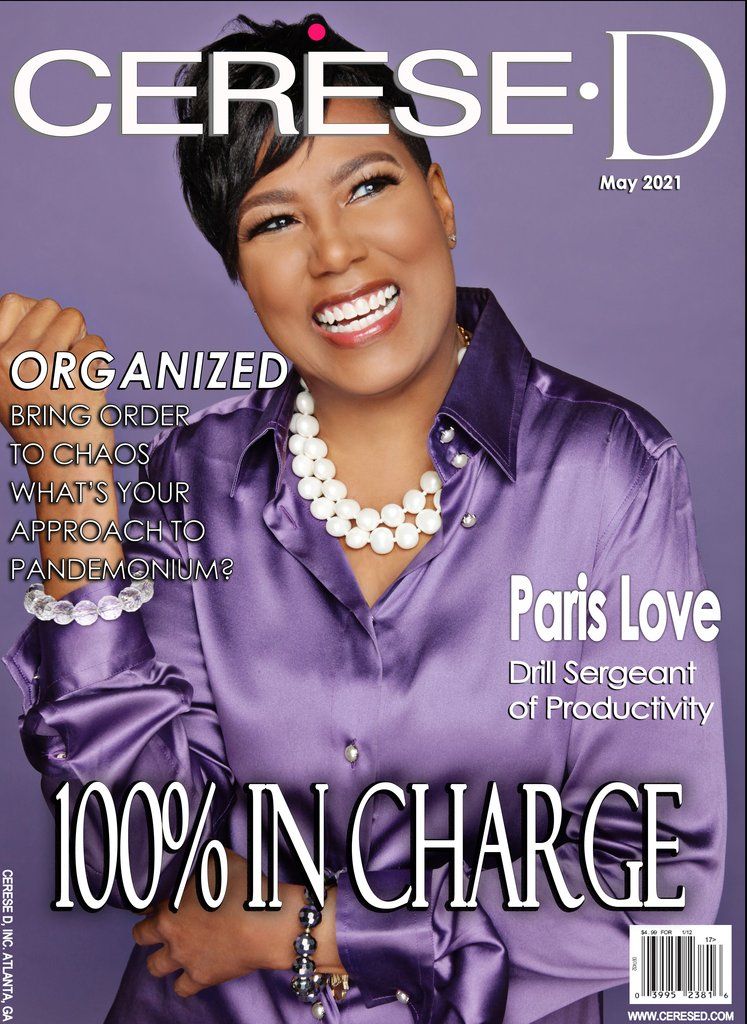 With more than 33 years of helping others organize and eighteen years running the Paris Love Productivity Institute formerly Organize With Love, Paris Love knows her way around a business. Not to mention, she’s also an ex-military Sergeant, so you probably wouldn’t want to argue with her about getting organized!

Paris Love, a former United States Army Sergeant, an accountability and productivity coach, affectionately known as The Drill Sergeant of Productivity is a highly sought-after speaker with tremendous talent for bringing order to chaos and pandemonium to her clients. She provides her clients with streamlined, efficient, manageable approaches to running their lives, homes, and businesses. After many years of working with a wide range of individuals in a host of settings, she has honed in on her specialty; helping overwhelmed professionals break through the barriers that keep them disorganized, disoriented, and dissatisfied in business, career, or life. Paris helps procrastinators do the things they always talked about but never get around to doing.

A nationally recognized productivity and organizational expert, her advice has appeared on numerous websites and in publications as well as appearances on the hit TV series, A & E Hoarders, and as an organizational expert with IKEA-Atlanta. She also has shared her organizational expertise as a columnist for Hope for Women Magazine. In addition to sharing her wisdom on television and in columns, Paris is a bestselling author with ten published books. She received Amazon’s top 100 Best Sellers in two categories and the TAZ award for her novel, Growing Pains. Her most recent book was published in 2020, A Woman’s Journey; Stories of Substance, Survival and Success with 7 other Remarkable Women.

Her high energy, loving but no-nonsense approach to life and living well has made Paris a hit with audiences from the West to the East Coast and from the North to the South. Paris has been featured on Focus Atlanta, CW Atlanta, My Atlanta TV and OnlineOrganizing. Known for her motivational candor that produces results, Paris guides experiences that will increase well-being and overall success. Active on social media, Paris can be often found sharing advice to help others navigate the process of decluttering and organizing on Facebook Live and Instagram. Using her social media skills, The Drill Sergeant of Productivity launched a YouTube series, Declutter Across America, that is now in its third season.

“Too much is given, much is required.”

Paris believes in serving others by giving back to her country and community. She has been engaged in various professional and civic organizations that serve women and girls, military families, veterans, and business owners. She has led many groups locally, regionally, and national levels. A natural leader, her leadership skills were enhanced and polished during her service to our country. She has helped organize or lead the following associations: Founder and President of the Gulf Coast Women’s Business Association; Past Assistant District IV Director for the Alabama Federation of Women’s Club; and Past President of the Gulf Shores Woman’s Club. As a professional organizer, Paris was highly active in the National Association of Productivity and Organizing Professionals (NAPO), a national organization that is dedicated to helping people and organizations bring order and efficiency to their lives. She was a Golden Circle member and held leadership roles as Past NAPO-GA Board of Directors; Past NAPO-GA Executive Board Member; Past Ambassador for NAPO and Past Co-chair on NAPO’s Membership Committee.

A staunch advocate for supporting women owned business, she is a current member of the National Association of Women Business Owners (NAWBO) and serves on NAWBO’s membership committee. Paris is devoted to mentoring and sharing her knowledge she has learned along the way to encourage business owners to never give up on their dreams of entrepreneurship. She is the Ecosystem Ambassador for Bunker Labs and a mentor for the  Renew Entrepreneurial Center. She also mentors veterans at eMentor Leadership Program, a cutting-edge online mentoring program for military personnel, veterans and military spouses.

In life, Paris believes we must continue to challenge ourselves to evolve and grow, personally and professionally. She is a proud graduate of Veteran Women Igniting the Spirit of Entrepreneurship (VWise) Program; a graduate of the Veteran Institute for Procurement (VIP) Program; a graduate of the Bunker Labs 20B cohort and a current member of the 21A cohort; and a graduate of Pre-Flight at the Entrepreneurial Center. In late 2020, Paris was inducted into the National Society of Leadership and Success. Paris is a member of the TAU Upsilon Alpha Beta Chi Honor Society and is currently enrolled in IVMF’s Larry Broughton’s Masterclass. In late April, she started the SBA’s Emerging Leaders program.

Paris’ love of life and her trailblazing abilities to bring people together has not gone unnoticed. She has received numerous nominations, accolades, and awards by her organizing peers, her fellow comrades, veteran service organizations, and women groups.  Paris was nominated for the 2005 NAPO-GA’s Organizer Choice Award-Volunteer of the Year; nominated in 2008 for the Business of the Year Award by the Alabama Gulf Coast Chamber of Commerce; was one of four finalists for the Vetrepreneur Award; a finalist for the 2020 Veteran & Military Spouse Entrepreneur Award for the Rosie Network; received Small Business of the Month by the Mobile Chamber of Commerce; received the Professional Development Award by the International Association of Administrative Professionals; and received Organizer of the Month by OnlineOrganizing; and received the Platinum Paperclip Award from NAPO-Georgia to name a few.

Never at a loss for words about sharing the joys of organizing, Paris has been heard on talk radio and podcasts around the country like CityCurrent podcast and Leverage Your Incredible Factor podcast. Paris is a recurring guest on the Connect Our Elders podcast. She was a sought-after speaker for women and professional conferences. She has been a speaker at NAPO’s Annual conference where she served as a panelist for “Ask the Organizer.”  Throughout the pandemic, demand for Paris to speak has increased exponentially! Corporations are recognizing the toll the pandemic has had on millions of individuals who are now working from home who are in desperate need of work/life balance and are overwhelmed with the disorganization in their homes that have suddenly become makeshift offices. As a mother and a grandmother, she understands firsthand, the importance of having balance between your career and personal life. And, keeping order in the home.

She is NaVOBA Certified Veteran Business, a Veterans Owned Small Business (VOSB) and has a Certification in Human Resource Management.  She has a Masters Degree in Human Resources and Business Administration from Keller Graduate School of Management and undergraduate degrees in Psychology from DePaul University and Fashion Design from Norfolk State University. She is currently in the final phrase of her doctoral degree in Advanced Studies of Human Behavior.

Sergeant Love was born and raised in Chicago, Illinois. She enlisted in the United States Army in 1989. She attended Basic Training at Fort Jackson, South Carolina, and Advanced Individual Training at Ft. Belvoir, Virginia. Upon graduation, her assignments were in Arlington Heights, Illinois and Joliet, Illinois. A fun military fact, Sgt. Love was the only female in the Primary Leadership Development Course. As a veteran, she continues to serve her country by honoring and recognizing military families through advocacy, support, and her partnerships with Veteran Service Organizations (VSOs).

Officially designated by Congress in 1999, May is National Military Appreciation Month (NMAM) and is a declaration that encourages U.S. citizens to observe the month in a symbol of unity. NMAM honors current and former members of the United States Armed Forces. Cerese D Jewelry salutes all active and reservists’ members, veterans, and their families for their service and sacrifice.