Meet JaQuitta Williams, the host of “Joy In Our Town” on the Trinity Broadcasting Network (TBN)! 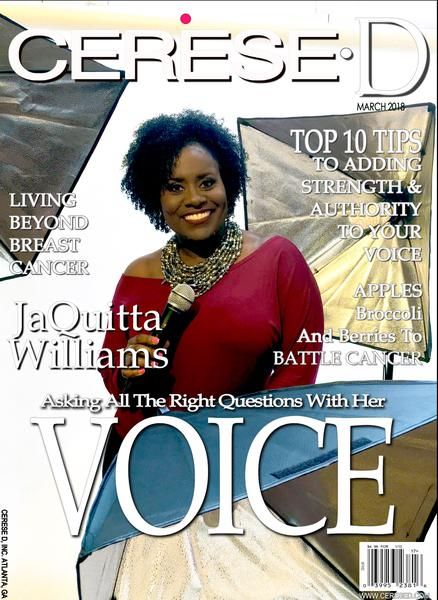 JaQuitta Williams is the host of “Joy In Our Town” On the Trinity Broadcasting Network or TBN.  It’s the home of Pastors like John Gray, Bishop T.D. Jakes, and Joel Osteen.  The 30 minute program can be seen on Monday’s at 6:30pm on WHSG-TV 63 and throughout the SouthEast.  JaQuitta is also a series regular on a new crime drama on TV ONE called “Atlanta Homicide.”  JaQuitta has covered local news in Atlanta for more than 10 years.  JaQuitta was also the host for  “Your Health Connection” on JAZZ 91.9 WCLK.  JaQuitta can also been seen on the Oxygen Network reporting on various cases on the national show “Snapped” ” Snapped:Killer Couples,  and “Killer Posts,” along with TV One’s “Fatal Attraction” “Justice By Any Means,  and “For My Man.”

JaQuitta joined CBS Atlanta News in July 2010. JaQuitta anchored the 4pm and 6pm newscasts, and had a feature segment, “JaQuitta’s Close Ups” JaQuitta  interviewed celebrities and fascinating people.  Before joining CBS Atlanta News, JaQuitta spent four years as an anchor and reporter at WSB-TV.
JaQuitta’s  TV career has included anchoring, reporting, producing and writing. JaQuitta has been featured on CNN Newsroom with Kyra Phillips, and CNN’s “Your Bottom Line,” hosted by Gerri Willis, along with CNN Newsroom with Fredricka Whitfield.

In addition,  JaQuitta  was an actress and singer in Director Robert Townsend’s “Musical Theatre of Hope” which aired on the Gospel Music Channel. JaQuitta appeared on Tyler Perry’s “House of Payne” and “Meet the Browns.”
JaQuitta was also part of  an episode of an all new cooking show called  “Lifetime TV for Women’s, Mom’s Cooking”. JaQuitta has done various on camera and voice over projects with “Home Depot” and a voice over project with “The Georgia Lottery.”

On the print side, JaQuitta was featured in the October 2008 issue of Essence Magazine, where JaQuitta talked about my diagnosis of breast cancer in July 2007. A favorite moment in her career was interviewing R&B singer James Brown. JaQuitta was an opening singing act for James Brown’s Birthday bash. JaQuitta also interviewed Good Morning America’s Robin Roberts. Both Robin and JaQuitta fought their breast cancer battles publicly.

JaQuitta was also a General Mills, 2011 Pink Together National “Survivor Ambassador” along with 4 other women were featured on General Mills products like Cheerios Cereal, Nature Valley Granola Bars, and other packaging.