Sharon Caples McDougle, is truly a modern day “hidden figure” who is not hidden anymore! Her long list of firsts show that shooting for the stars is possible. Her dedication to her country and her trailblazing, glass shattering contributions to science and space have not gone unnoticed. 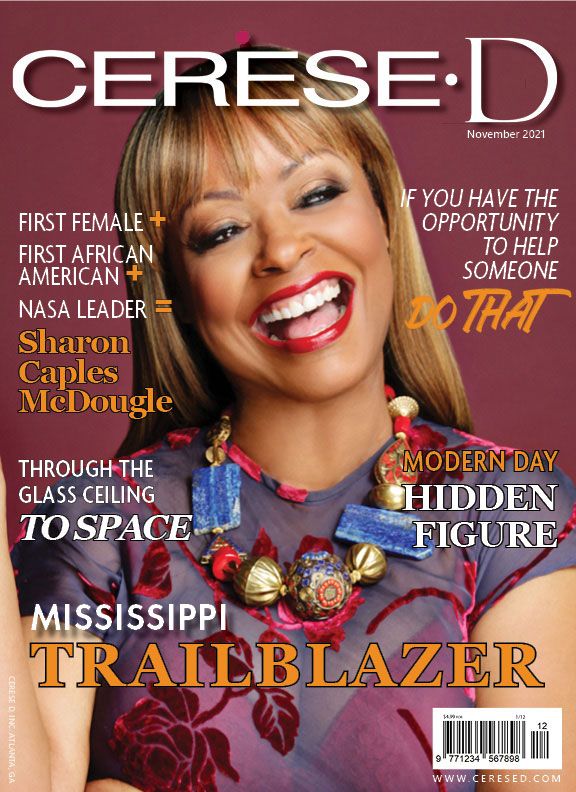 Sharon Caples McDougle became a vital part of the the NASA family in 1990 where she worked in the Space Shuttle Crew Escape Equipment (CEE) department. She began her career as a CEE Suit Technician and was responsible for processing the orange launch and entry suit (LES) assemblies worn by Space Shuttle astronauts. McDougle was one of only two women technicians and the only African American technician when she began her career. 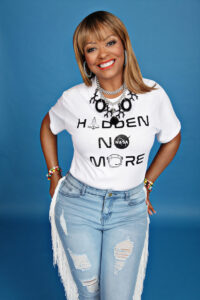 McDougle is truly a modern day ‘hidden figure” who is not hidden anymore.  Everyone knows Dr. Mae Jemison was the first African American woman to go to space – but many do not know that another African American, McDougle, with her own list of firsts, was responsible for ensuring Dr. Jemison’s safety into orbit and her return to earth. McDougle was Jemison’s suit tech for her historic mission aboard the Space Shuttle Endeavor September 12, 1992.

For over a year, McDougle trained along beside Dr. Jemison on all facets of working in zero gravity in her suit. Dr. Jemison has openly shared her respect and admiration for McDougle and once wrote, “There are so many incredible people who ensure that astronauts make it to space and back safely. Thank you, Sharon McDougle, for your hard work!”

In 1994, McDougle was promoted to the position of Crew Chief making her the first woman and first African American CEE Crew Chief. In her new position, she was responsible for leading a team of technicians to suit up astronaut crews. McDougle had the honor of leading the first and only all-woman suit tech crew.  McDougle along with her team met the astronauts immediately after leaving the shuttle upon return from space. 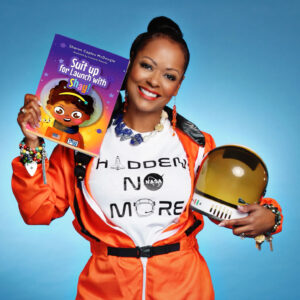 In 2004, McDougle became the only woman and only African American promoted to the position of Manager of the CEE department. She managed over 25 employees who were responsible for training the astronauts on how to donn and doff their suits that were designed to save their lives and taught all the technical aspects of their suits worn into space on the Space Shuttle for the launch and recovered the crew upon landing. She held this position until the Space Shuttle Program ended in 2011. She continued working until 2012 to help close-out the program, ending an illustrious 22-year career with NASA.

Other notable astronauts McDougle helped train for lift off into space safely and recover upon reentry are Charles Bolden (former NASA Administrator), Frederick Gregory (1st African American Space Shuttle Commander), and Dr. Bernard Harris (first African American to perform a spacewalk). She even had the opportunity to suit up a few celebrities which included actors Tom Cruise and Candice Bergen.

During her career with NASA, she was recognized with the Astronaut “Silver Snoopy” Award, Space Flight Awareness Honoree Award, and the coveted Women of Color in Flight Award from Dr. Mae Jemison recognizing her as the first and only African American woman suit tech/crew chief in her field.

The Air Force prepared McDougle for her historic career with NASA. In the Air Force, McDougle was an Aerospace Physiology Specialist who was responsible for training the SR-71 and U-2/TR-1 reconnaissance aircraft (“spy planes”)  pilots on high altitude operations. She performed hazardous duty as an inside observer chamber technician and as a chamber operations team member during hypobaric (altitude) and hyperbaric (dive) chamber operations. During the hypobaric chamber flights crewmembers learned firsthand how hypoxia affects their judgment while flying an aircraft. The crewmembers were taught and practiced how they would handle these types of situations and the importance of wearing all equipment correctly

McDougle also inspected and maintained flight equipment used for the SR-71 and U-2/TR-1 missions. The equipment included full pressure suit ensembles (helmet, gloves, boots, etc.), harness assemblies, and survival equipment (seat kits and parachutes, and emergency oxygen systems). She sized and fitted crewmembers’ pressure suits, assisted crewmembers in donning and doffing their suits, and performed functional tests before takeoff. She also loaded the survival seat kits and parachutes into the aircraft, strapped-in the crewmembers before take-off, and recovered the crew upon landing. During her time in the Air Force, she was awarded the Humanitarian Service Medal, Air Force Outstanding Unit Award, and Good Conduct Medal

McDougle’s military training and her 22 years hidden working with NASA astronauts has given her a wealth of knowledge she shares while volunteering in her community and with several organizations. She serves as Vice President and Executive Administrator for Unveiled Aspirations – a women’s empowerment organization. Other volunteer activities include reading to children, cleaning community gardens, working in food pantries, feeding the homeless, and working in thrift stores, just to name a few.

A firm believer in mentorship and forever thankful for the teachers who inspired her to reach for the stars, McDougle is a TWST4Girls (Together We Stand Tall 4 Girls) mentor/facilitator for the Harris County Juvenile Corrections Department Program. She is also a mentor with the Patti Grace Smith Fellowship. The fellowship’s purpose is to give collegiate Black students their first Aerospace internship! 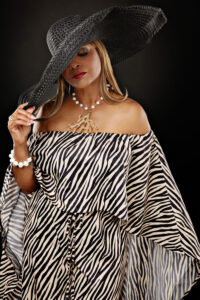 Her dedication to her country and her trailblazing, glass shattering contributions to science and space, have not gone unnoticed. McDougle has been recognized as a Mississippi Trailblazer at the 2018 Mississippi Trailblazers Awards Ceremony and Black-Tie Gala where she received two awards: The Calvin “Buck” Buchanan “FIRST” Award named for Mississippi’s first United States Attorney for the Northern District, which honors a Mississippian who holds the distinction of being the “first” in their profession, and the Dr. Cindy Ayers “Legacy” Award honoring a Trailblazer whose singular work and contributions will leave a legacy long after their lifetime.

The accolades continue, “That Girl” Natasha Lee and the city of Detroit honored McDougle at the “Make Your Mark Symposium.” McDougle received The Spirit of Detroit Award for exceptional achievement, outstanding leadership, and dedication to improving the quality of life and The Black Caucus Foundation of Michigan recognized her with the Leadership and Commitment of Excellence Award.

Loved Around the Country

She is not only loved in Mississippi but around the country! She was made an Honorary Citizen of Lake Charles, Louisiana by Mayor Nic Hunter and was a Remarkable Women of Houston finalist for CW39’s Houston Morning Dose News. McDougle is also a That Girl Brand Ambassador and a member of the Red Hat Society. Her Red Hat Chapter, Divas With Hattitude, recognized her as their very first Woman of the Year! She was also crowned as the 2019 Bluebonnet Queen.

McDougle has been featured in various publications, media outlets, radio shows and podcasts. She shares her inspirational story during speaking engagements, virtually and in-person, as keynote speaker as well as participating as a panel member at colleges and university STEM activities. McDougle recently became an author, penning her first children’s book titled “Suit Up for Launch with Shay!”  She also shares her story “Does God Love Me?” in the upcoming book Fearless Women Rock, Volume III.

McDougle is happily married to her husband Maronald, a diver for NASA. They have two adult children, Dominique, and Corbin. She and her husband are natives of Moss Point, MS, currently residing in the Houston, TX area.

Connect with McDougle via the web: 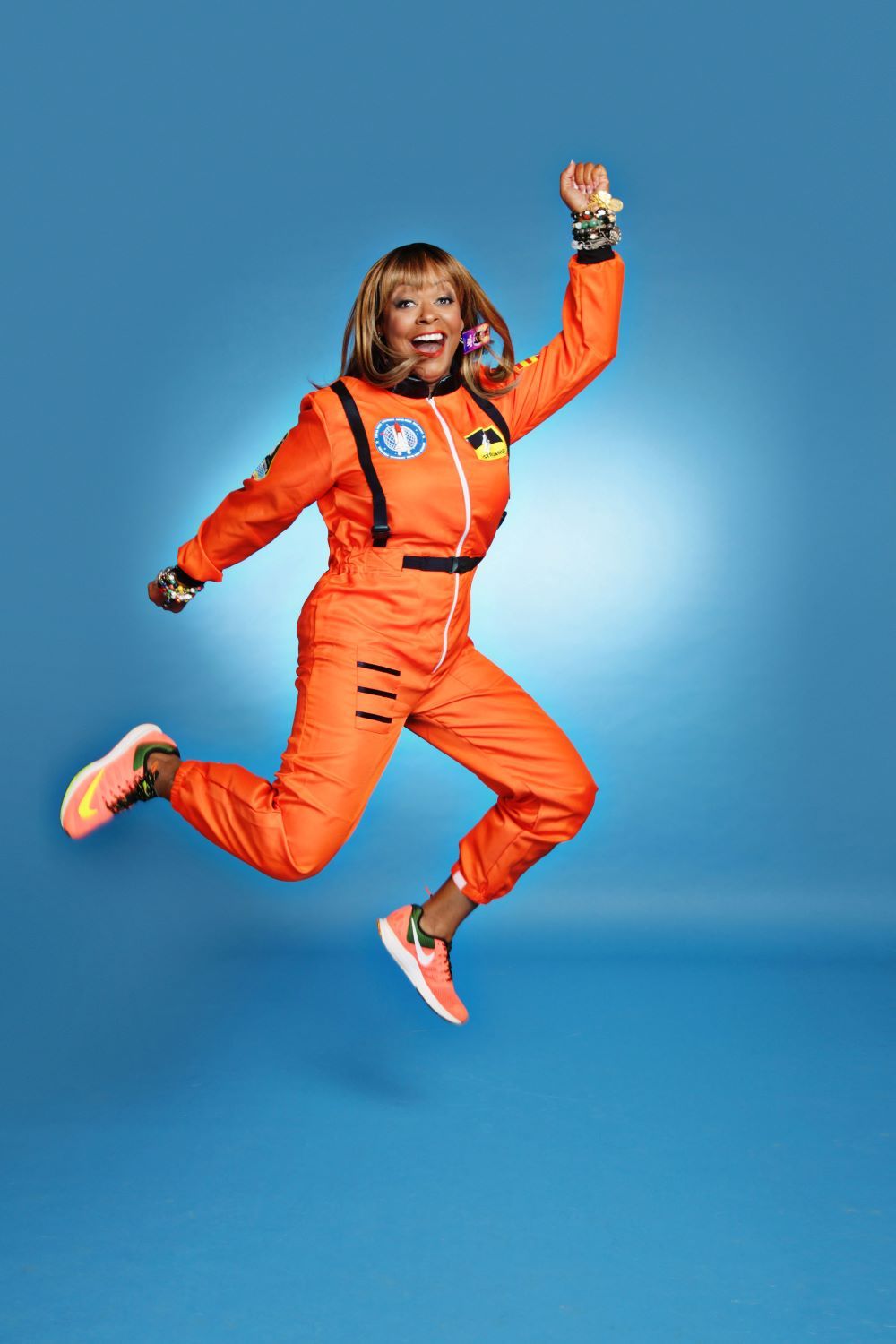 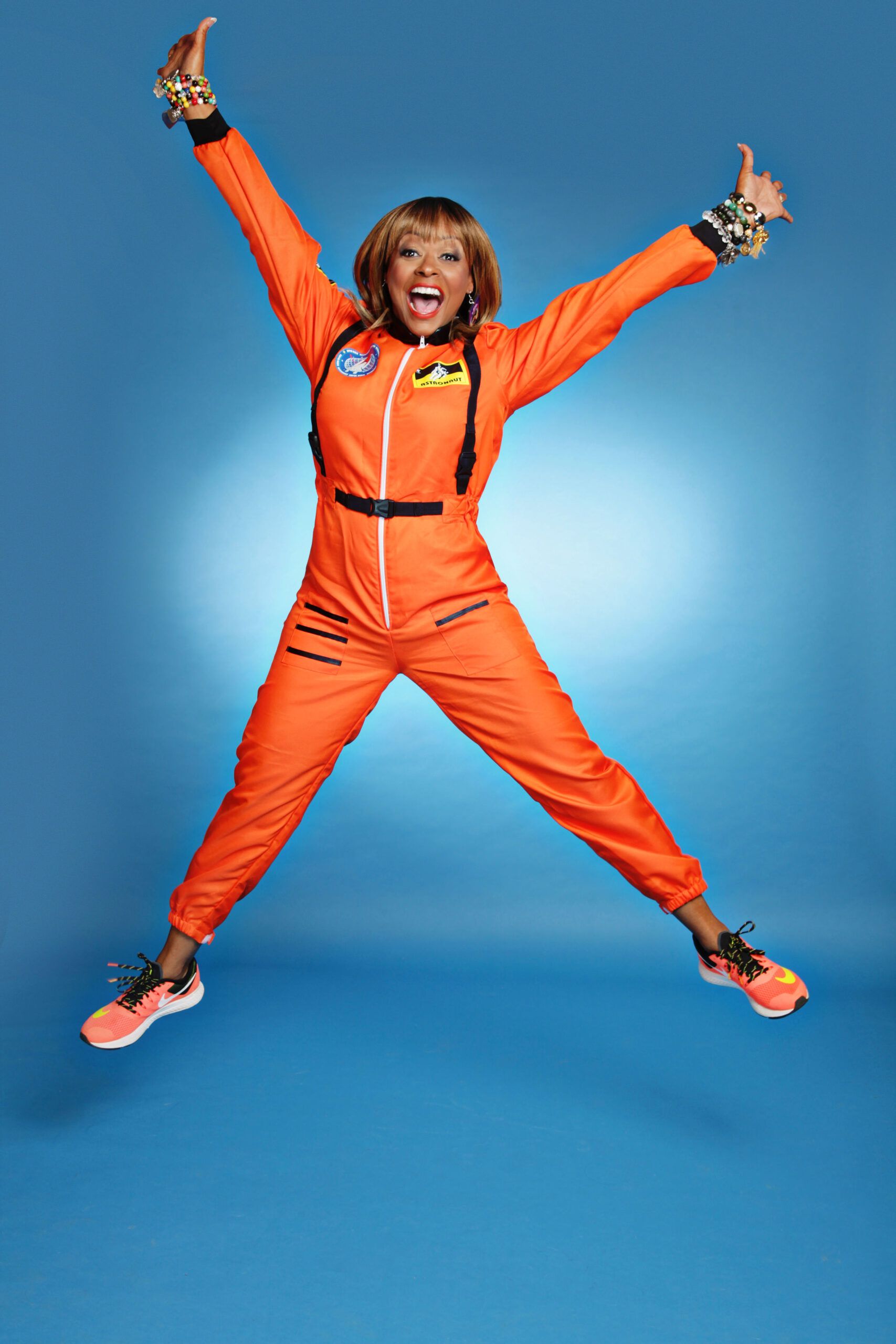 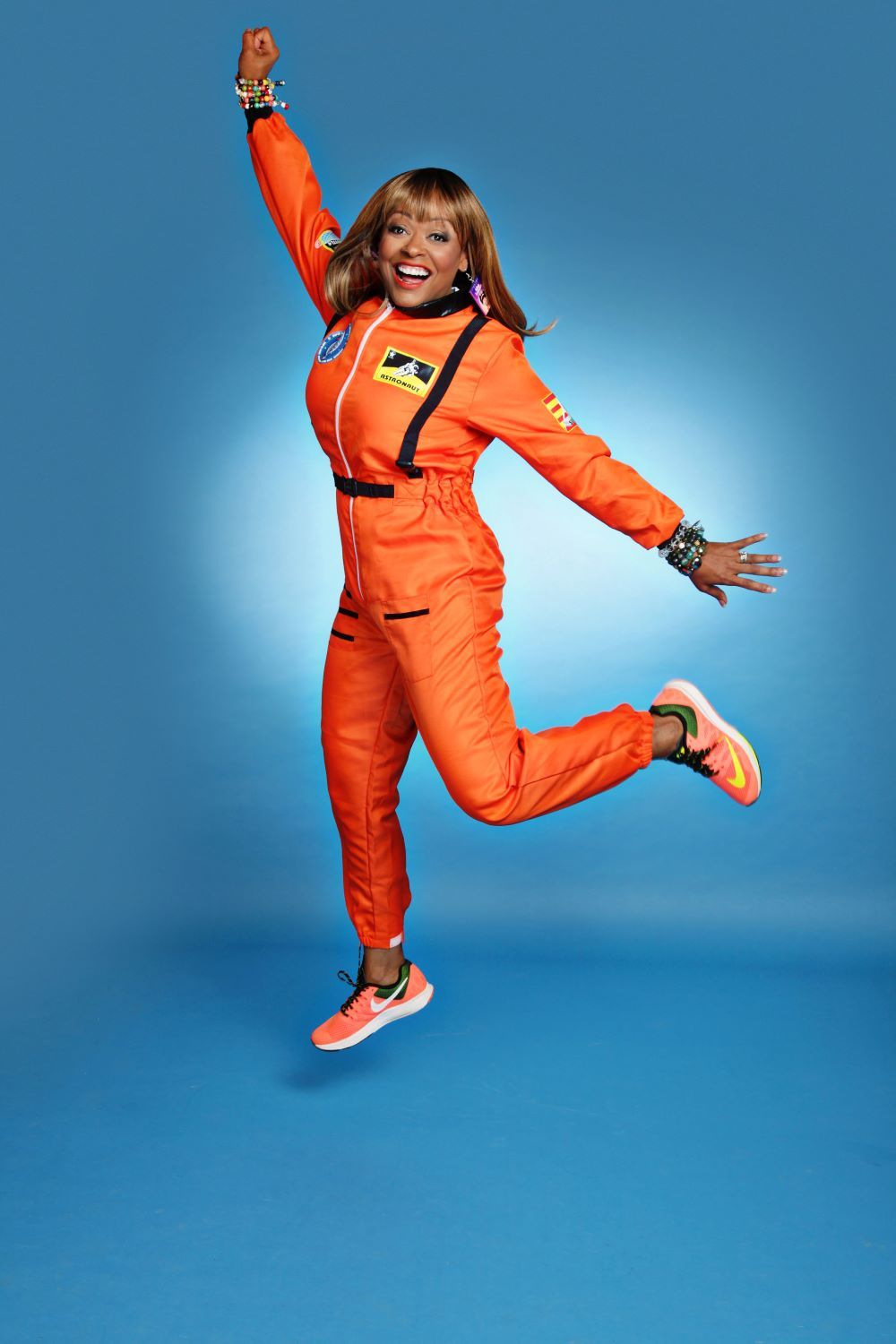